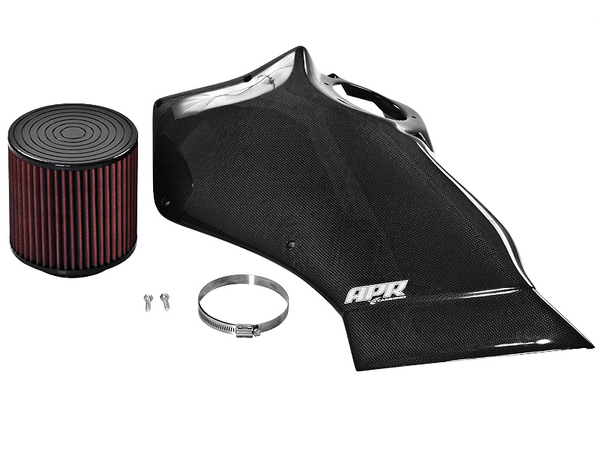 Pick up APR's latest carbon fiber intake for the 3.0 TFSI engine is a ram air design that completely separates the intake filter from the engine bay. Building from years of experience on and off the race track, APR's engineering teams have spent countless hours developing a true cold air and ram air carbon fiber design that can be recreated affordably for the street performance enthusiast.  You won’t be disappointed.  Horsepower and Torque will increase after installation, and your fuel economy will increase.  The intake will also give you increased throttle response.  The installation of this product is rather easy and it will give your supercharger an enhanced sound.  This intake system is no joke.  Pick one up today.  APR have gone even further to maintain all OEM specifications necessary to integrate cohesively with an otherwise stock engine to avoid raising eyebrows at the dealership. Flexibility was another characteristic of APR's design whereas the new TFSI intake is also suitable for Stage 1 and Stage 2 modified engines all the way up to future supercharger upgrades.

Install guide can be downloaded here.

No reviews have been written for this product.
Write a Review